School of Social Work and Arts
Back to Faculty

The University Theatre Ensemble (UTE) at Charles Sturt began in 1972 as a way to introduce drama studies and public performances to students enrolled in the then Bachelor of Arts: Acting for Stage and Screen and Bachelor of Arts: Theatre and Television. This came as a means to provide these opportunities in a structured and safe learning environment keeping in mind the ever-changing compliance requirements of the performance arts, public performance and education.

Since it began 47 years ago, over 290 productions have been staged both in licensed public performance spaces as well as other venues such as schools, parks, galleries, and restaurants.

UTE continues to be the stage production arm of the Acting and Design courses of the School of Social Work and Arts, Charles Sturt, through which students undertaking the Bachelor of Creative Industries gain their public performance experience.

We continue to mount a number of productions each year and with solid enrolments into these vibrant courses, UTE will continue to grow and develop in years to come. We are privileged to have the recently renovated 211 seat Charles Sturt Riverina Playhouse as our home theatre where the majority of our productions are performed.

Previous UTE directors include Colin Anderson, Ray Goodlass, Kim Hardwick and John Saunders to name a few. Writers in residence and commissioned playwrights include Dorothy Hewett, Finegan Kruckemeyer, Donna Abela plus many others. 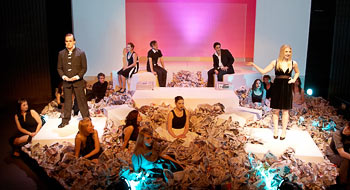