The Power of Language on the Political Event in Indonesia: A Multimodal Analysis of President Jokowi’s Speeches

This research aims to investigate Jokowi’s political speeches, as the president of Indonesia, which are delivered in the formal and informal situation. The research will be using the Multimodality analytical framework as its tool of analysis. Data are projecting to be taken from video speeches of President Jokowi from the official social media of the Indonesian government such as Facebook, Twitter, Instagram, as well as Youtube channel. And will be supported by other public social media such as Television and others. The analysis will be focusing on three aspects of Multimodality namely Tenor, Field, and Mode from Kress and Van Leeuwen's theory and will also be combined by searching for the ultimate meaning of the aspect of intertextuality from Wodak’s theory. For significant purposes, this research will be contributing to the development of political communication from a linguistics point of view especially the aspect of building the multimodality features in delivering political speeches in Indonesia and also the world widely.

By doing good collaboration between me and the supervisors who are expert in Multimodal will bring my research to its final goal. Supervisory guidance and direction which is also supported by encouragement from the school, faculty, and the Graduate Studies Office will enable me to complete my research well. In addition, the facilities available at Charles Sturt, both in the form of academic development workshops and others, will improve my research skills so that I will be able to finish this research. 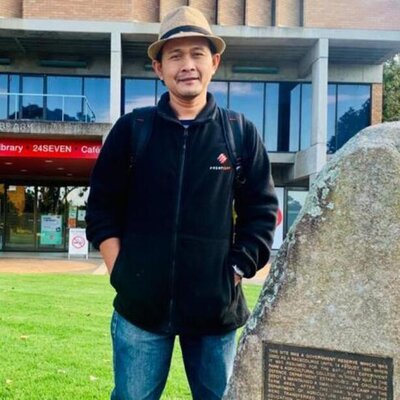 Emailmpurnomo@csu.edu.au
Maslathif is a Full time PhD candidate in the School of Teacher Education.